Scents and Sensibility: A History Lesson in Base Notes

How a perfumer is breathing new life into the fragrance industry.

Ally is working to encourage the next generation of entrepreneurs to embrace their financial futures and take a chance on their passions. They are furthering that mission by telling the stories of business owners who seized the moment and made drastic career shifts to build brands from scratch. Each of these creators are bringing a fresh perspective to their respective industries and inspiring our audiences to build better businesses for themselves, and the community at large.

Beyond serving merely as historical reference or inspiration, the iconoclasts of the past are still shaping contemporary culture and politics—now in an entirely new way. The heady glamour of the international jet-set mecca of the 50’s that influenced St. Barths and the political dynasty that ruled long before the Windsors or Kennedys, are just some of the seminal moments and eras that luxury perfumer Carlos Huber has bottled in his collection of unique, artisanal fragrances, called Arquiste. The line combines Huber’s passions for fashion, architecture, design, and fragrance with a master’s degree in historical preservation from Columbia University, to create a one-of-a-kind history lesson. Starting with a career in store design for Ralph Lauren, Carlos switched gears to make his love of personal scent his life’s work.

But tracking down first-hand accounts of the trees that grew in the forest where Alexander the Great waged a battle or the exact wood of the table in the room where Louis XIV of France and Maria Teresa of Spain first laid eyes on one another, is no easy feat—let alone combining these errant notes into something beautiful for everyday wear. Creating just one bottle of an Arquiste fragrance takes years of research and attention to detail. Below, Huber shares his process for crafting two of his latest scents El Y Ella and Fleur De Louis/Infanta en Flor and connects the dots from the past –both decades and centuries ago—to our present. 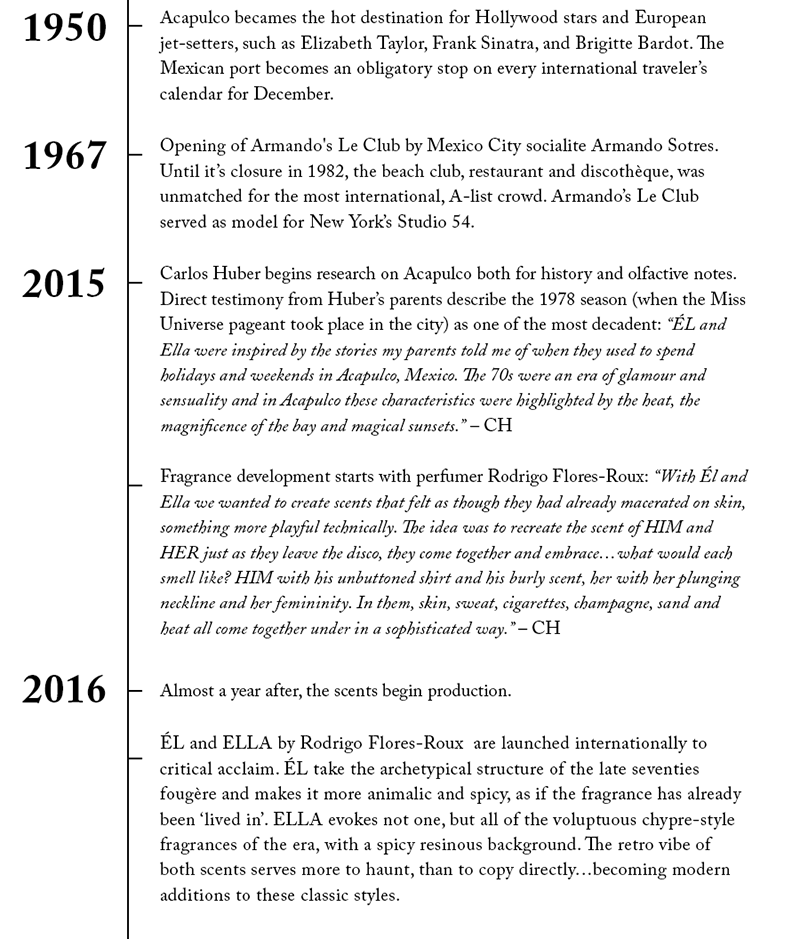 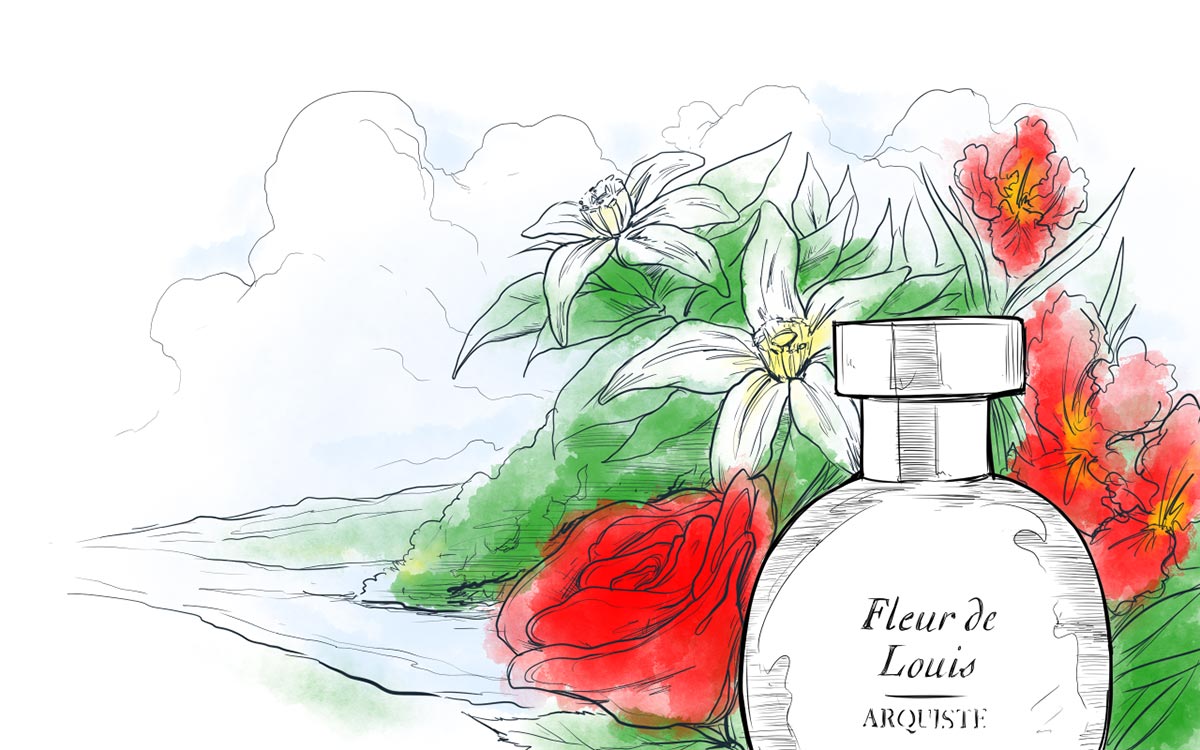 The moment when Maria Teresa, the 17th century princess of Spain and later Queen of France met her future husband Louis XIV of France is remembered in history as the Meeting on the Isle of Pheasants that ended the Franco-Spanish War and began a long-tenured affinity between France and Spain. Fleur de Louis and Infanta en Flor capture the male and female essences of that meeting, from the perspective of both Louis and Maria Teresa, as well as the elements of the room they were standing in, recreating a centuries old scene. 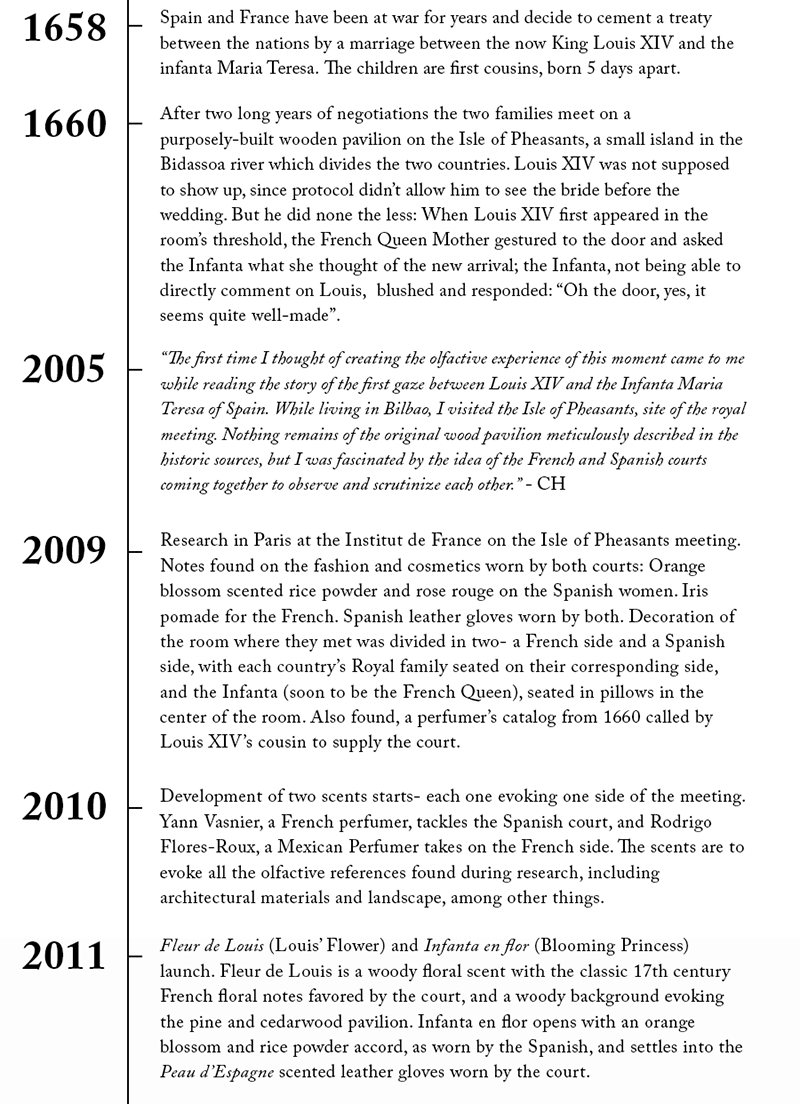